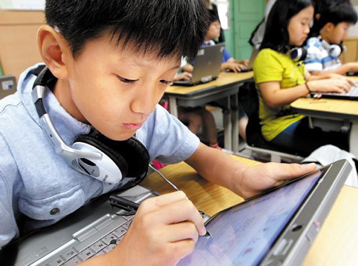 The College of 2020 in South Korea will be online and accessible through tablet computers nationwide. In what now positions South Korea at the forefront of digital education initiatives, the Ministry of Education, Science, and Technology in South Korea recently announced it would invest more than $2 billion in digital textbooks for students nationwide. South Korea is not wasting any time moving towards a digital education – in less than four years it will have all textbooks digitized. At that point, the majority of learning will be centered on tablets. The ultimate goal is to have all textbooks digitized by 2015 and available to students through a cloud computing system. All students will have free access to the textbooks through tablet PCs, which the government will supply to low-income families who cannot afford them.

The goal of the project is to make knowledge more accessible and free for students starting in elementary school. This digital-textbook initiative will both personalize and enhance the ability of South Korean students to learn at their own pace, as well as give institutions and parents the ability to create custom learning plans for students.  According to the South Korean newspaper ChosunIlbo, The Ministry of Education, Science, and Technology also wants to start offering classes online for students who fall behind or get ill. These online classes would count as regular attendance.

Without a doubt, South Korea’s investment in a digital textbook program represents a significant shift in education. In the United States there are a number of key interactive textbook companies – including Inkling, Kno, and PushpopPress, but without large-scale adoption and endorsements they will be competing on price and available titles. Also large scale adoption will likely take longer. In the US, textbook sales are a $4.5 billion market, so large-scale collaboration is also highly improbable. But, if the United States or a collective group of US institutions were able to spearhead a similar digital textbook initiative it would create an incredible opportunity for students – to both accelerate learning and provide greater access to knowledge.