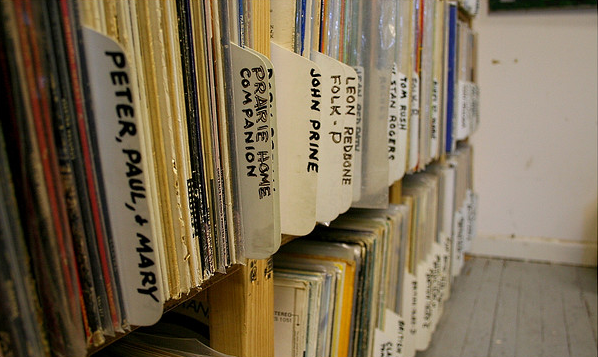 Those businesses were dominant because they were the only source of a good that you wanted. The products were valuable because they were essential and scarce. They came basically in one package, and the producers determined where you could get them and how much you would pay. Bottom line: One size fits all — now get in line.

The limited availability and control of distribution channels is the very thing that makes a good  valuable. This is the economic principle of scarcity at work. When that changes — a product becomes commonly and instantly available — the old business model is lost. The scarcity was only artificial. So record stores close, magazines and newspapers fold, post offices lay off workers, limit delivery, and perhaps, close, too.

Yes, it is overly crass and simplistic to compare records and newspapers to college educations. But as a means for framing why the higher education system in America is so threatened, it is useful to think of the theory of scarcity as it applies to higher education.

Colleges and universities have thrived based on the accepted public wisdom that a college education is valuable for the good of society. Therefore, society has endorsed higher education, with its money as well as its moral support. And there has always been the evidence of the economic benefits that accrued to those who received the product.

With more than 4,000 institutions of higher learning, the American higher education system is expansive and diverse. But it is not marked by the kinds of creativity and competition that such a large marketplace would typically produce.

Rather, most American colleges and universities have been marked by rigidity — many still require students to be full-time to enroll in many or all programs. Many require freshmen to live on campus and make it very hard to opt out of things like meal plans. Many have closed the door to electronic textbooks.

This rigidity, and resistance to change, is characteristic of a business that enjoys the advantages of scarcity.

So to those who still believe that is true, here’s some news: scarcity no longer applies to higher education.

College-level courses are available online any time from either degree-granting institutions or institutions that have decided to make course content available for free. There are courses that cost $140, courses available on mobile phones, colleges that give credit for life experience.

The for-profit institutions have grown so quickly not because they offer a superior education that opens more career doors. They have been successful because they have punctured the myth of scarcity, and shown that it actually is not that hard to open the doors of academe wider, and let people go to classes on their schedules, and learn at their own pace.

Yet many traditional colleges persist in operating as if none of these innovations have occurred. They believe, against all the available evidence, that the old way of doing things, the only way they have ever done things, will still carry the weight in this increasingly crowded market.

This post is about giving you permission to free your mind, and think about higher education in a new way. When a college fundamentally accepts and embraces that the market for higher learning has indelibly changed and will continue to change, it opens all kinds of possibilities for making long-range changes in all areas of operations: admissions, marketing, facilities, and yes, even academic programs.

Over the next few blog posts, we will explore each of these areas, and make some suggestions of what colleges ought to be thinking about in a new era when scarcity is no longer defining the market, but competition is.

Next: The new market for admissions

One thought on “Economic Scarcity and Higher Education”